Excessive College Soccer Participant Wins Most Inspirational Award. He is out now

Lots of boys in seventh grade played football for my Colorado Springs middle school and I didn’t. Although I’ve been told that if I try and even be good, I would enjoy it, I couldn’t get over this one thought: Guys like me don’t play football. I was too emotional and different.

For a long time I felt different to other guys my age. When I went to high school as a freshman, I did what I thought guys like me should do – join a choir and do theater productions. I connected a lot of my identity to being a choirboy.

In the winter I went to my theater audition and it was rubbish. I was under-prepared and collapsed under pressure. I thought I could save a role in the theater company and signed up as a crew member. I was rejected. In the spring, I skipped trying it out for the track and auditioned for the cast and crew, but had the same result: a tough rejection.

As a student at Liberty High School, I gathered up my courage and, to everyone’s surprise, said I wanted to play soccer. It wasn’t an easy phone call. Not only was I trying to prove to my parents that I was doing what I wanted, but I had to prove it to myself.

I asked the head coach if I could quit and get a refund so I wouldn’t waste my mom’s money and my coaches’ time. Coach G and the assistants sat with me and asked me to give me some more time. They reminded me that it was my first year of playing and that I started playing football four years later than most of the others.

Flash forward to autumn 2020. Due to the Covid rules, we played our last game of the season. We lost and it was the last game of the game. I was a backup running back and hadn’t had a carry all year, just played in special teams. My coaches knew I hadn’t played much and sent me to carry.

It became the most defining moment of my career. I was finally going to play the ball and my only job was not to fumble around.

In a sports movie, this is the part where time slows down, my crush screams my name from the stands, and I magically dodged the other guys’ hits and made it to the end zone to score a touchdown.

Instead, I was hit hard and fumbled.

My teammates had to help me up because I cried so much that I couldn’t stand. Coach A, the offensive coach, came up to me and I thought he was going to be pissed off that I still screwed up after all that training. I apologized for the fiddling and crying. He told me he wasn’t worried about it. He was worried about my health as I had just been hit by a player’s truck who had caused the fumble.

I’m bisexual and I’ve been with a couple of players. One of them came up to me in the field, hugged me and said it was okay. He knew how tough I am on myself. One of the seniors who was the first running back hugged me and told me that mistakes happen and that it is okay. 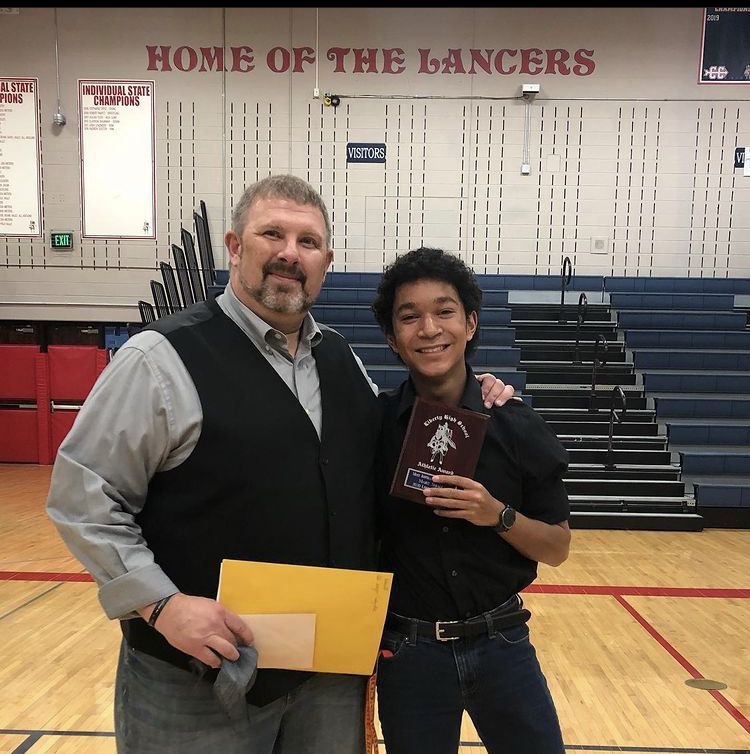 Marc Small with his soccer trainer after winning the Most Inspirational Player.

Our team banquet has been postponed to this March. To my surprise, I was named “Most Inspirational Player”. One reason for the award was the fumbling and how everyone gathered around me. The other was when I left a weightlifting session early and came back in my choir suit to need help from teammates with my tie to go to a performance.

Being in the choir and also playing soccer drove my coaches’ expectations of a high school athlete. Being able to juggle in a choir, sports and relatively good grades were things that struck me (AP Latin is not easy). My coach said they need more people like me on the team.

Since then I’ve joined the track team and live more authenticity. I accept that it’s okay to both be in the choir and play football. I bought my Denver Broncos Pride shirt and I really enjoy wearing it and am grateful for the acceptance I get.

I’ve never officially come out to my coaches, but I can imagine some adding two and two together. The closest thing I ever came to was when a trainer said he wouldn’t treat us any differently if we liked guys while a couple of us were having relationships. I wanted to get out then, but decided against it. I hope to use this article to officially publish it as I am better at writing than speaking.

This month I was excited when the NFL posted this on their Instagram account for Pride Month: 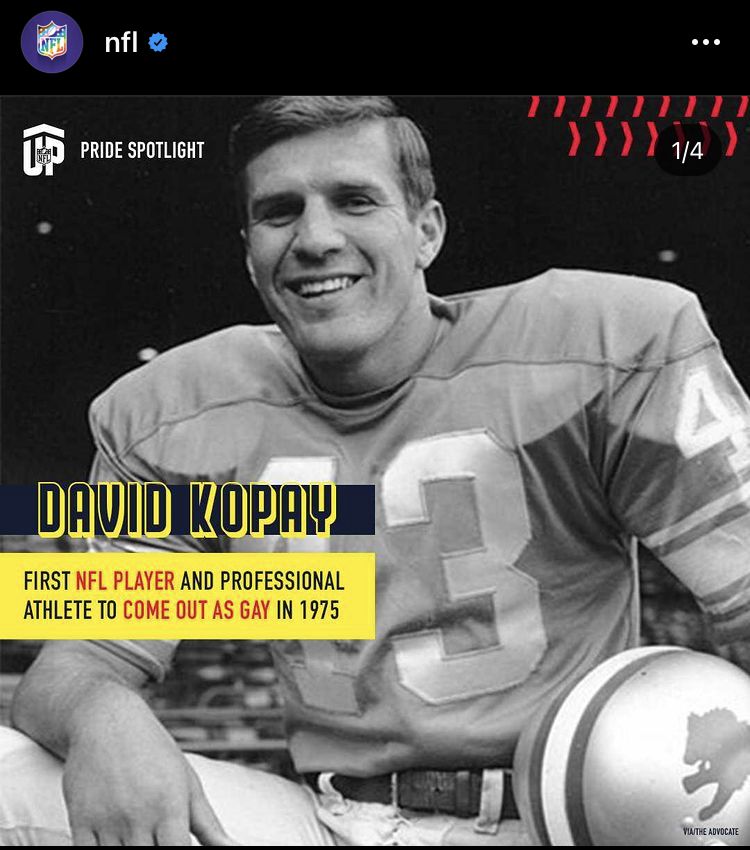 I was so excited to see it that I posted the picture on my Instagram story to find another way to get out of it. It meant a lot that the NFL had taken more steps to be inclusive.

As I finished writing this on Monday, I saw that Carl Nassib of the Las Vegas Raiders was turning out to be gay. His coming out is powerful because he will be the first active player to be out. If I could, I would shake his hand and hug him because I felt less alone seeing his post coming out. The support and positivity made me emotional and it made me less nervous getting out on this article. I hope his coming out will change the athletes’ outing and make it easier.

The following is what I posted in my story that made it possible for me to come to one of my camp friends on Monday: 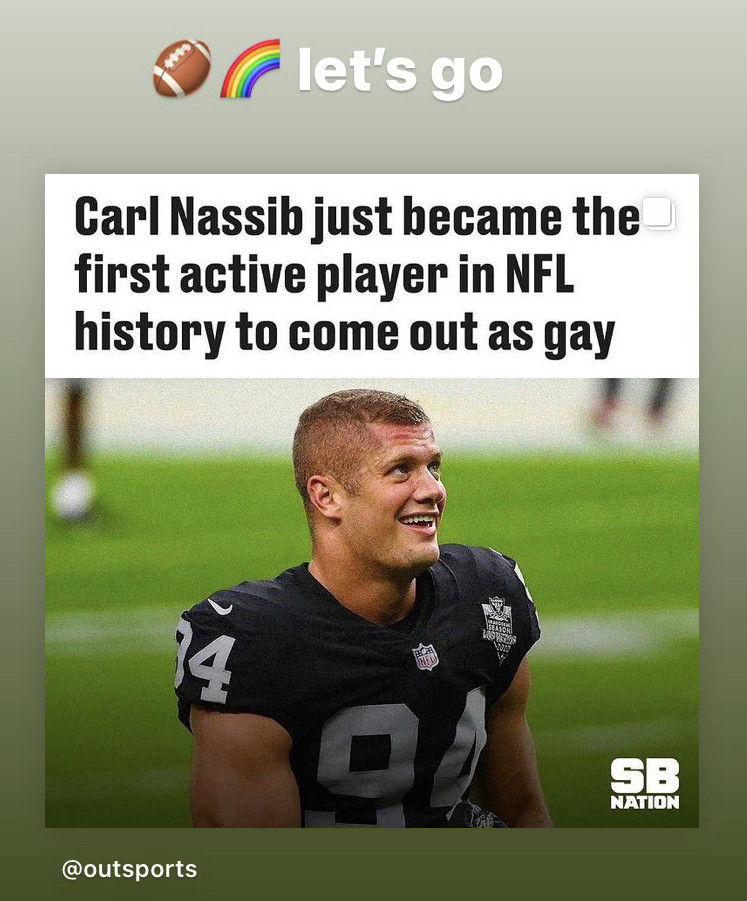 Soccer is a mentally and physically demanding sport. I often come up against my own limits. I spend a lot of time with teammates and it was very exhausting to hide a part of myself. Football has given me the confidence to finally sit down and reflect with myself and come to terms with who I was.

My advice to any player who is not entirely sure who they are, especially young players, it’s okay to be confused and feel out of place. Cheer up and live authentically. The world needs someone like you.

Marc Small, 17, will graduate from high school in spring 2022. He is in the highest choir class of his school as well as in AP Latin. He is a member of the soccer and athletics teams and also in the choir. He hopes to study exercise physiology and / or creative writing and pursue a career as a coach. He can be reached by email at [email protected] or Instagram (@marc_hsmall).

If you’re an LGBTQ person into sports and want to tell your story, email Jim ([email protected]).

Check out our archive of coming out stories.

If you are an LGBTQ person into sports and want to network with others in the community, visit GO! Space to meet and interact with other LGBTQ athletes or to the Equality Coaching Alliance to find other coaches, administrators and other non-athletes in the sport.