Imagine a fantasy football league in which Darren Waller projects to outscore Dalvin Cook. Imagine a league that has been so spiced up that conventional thinking goes out the window. That’s fantasy football at its finest.

Whether it’s by utilizing a two-quarterback setup, tight end premium scoring, rewarding fantasy points per completion or severely penalizing quarterback incompletions and sacks, there are a plethora of ways to add extra sizzle ahead of the fantasy season.

For those looking for inspiration for fun and exciting rule changes, look no further than one of the world’s largest fantasy football leagues, the Scott Fish Bowl. The Fish Bowl, a premier pro-am tournament, is in its 11th year and brings together numerous fantasy football analysts, celebrities and hundreds of fans. Founded by Scott Fish, the league’s main goal is to raise money for charity. But make no mistake, the rules in this league are intense and add an extra layer to fantasy gaming like never before.

The Scott Fish Bowl is a two-quarterback/Superflex league format, so locking in top quarterback studs early in Round 1 remains a tried-and-true approach.

However, the extra wrinkle thrown into the scoring for quarterbacks makes their fantasy production more heavily weighted to their actual performance on gameday. The days of banking on Blake Bortles-esque garbage time are long gone because signal-callers are harshly penalized for incompletions, sacks and interceptions.

Quarterbacks are also rewarded for completions, which helps the more immobile passers keep pace against their rushing counterparts. For example, Tom Brady is listed as the No. 3 quarterback because he projects to be first in completions (430), way ahead of the No. 5 projected quarterback, Lamar Jackson (315).

For that reason, the late-round quarterback strategy remains firmly in play even in the two-quarterback landscape. And there aren’t better targets than Derek Carr and Matthew Stafford. Their original projections have them both outside the top 15 quarterbacks, but each cracks the top 10 in the new scoring setting.

The lack of buzz around Carr is surprising, given that he finished eighth in expected passing touchdowns (30) and had a top-five on-target rate on passes thrown 20-plus yards downfield (53%) in 2020. He’s not only a steal in #SFB11 but in all two-quarterback leagues as a reliable No. 2 option.

The only major change to the running back positional scoring is the addition of 0.5 points scored for a rushing first down. That might not sound like much, but it does wonders for the likes of Derrick Henry and Nick Chubb, who don’t project to be heavily involved in the passing game. The dynamic helps even the playing field against the receiving backs like Austin Ekeler and Alvin Kamara.

The projections also further the gap between Christian McCaffrey and Dalvin Cook, suggesting the former is more than worthy of the first overall selection. Cook is still well within top-five consideration but ranks slightly behind the top echelon of quarterbacks and tight ends. 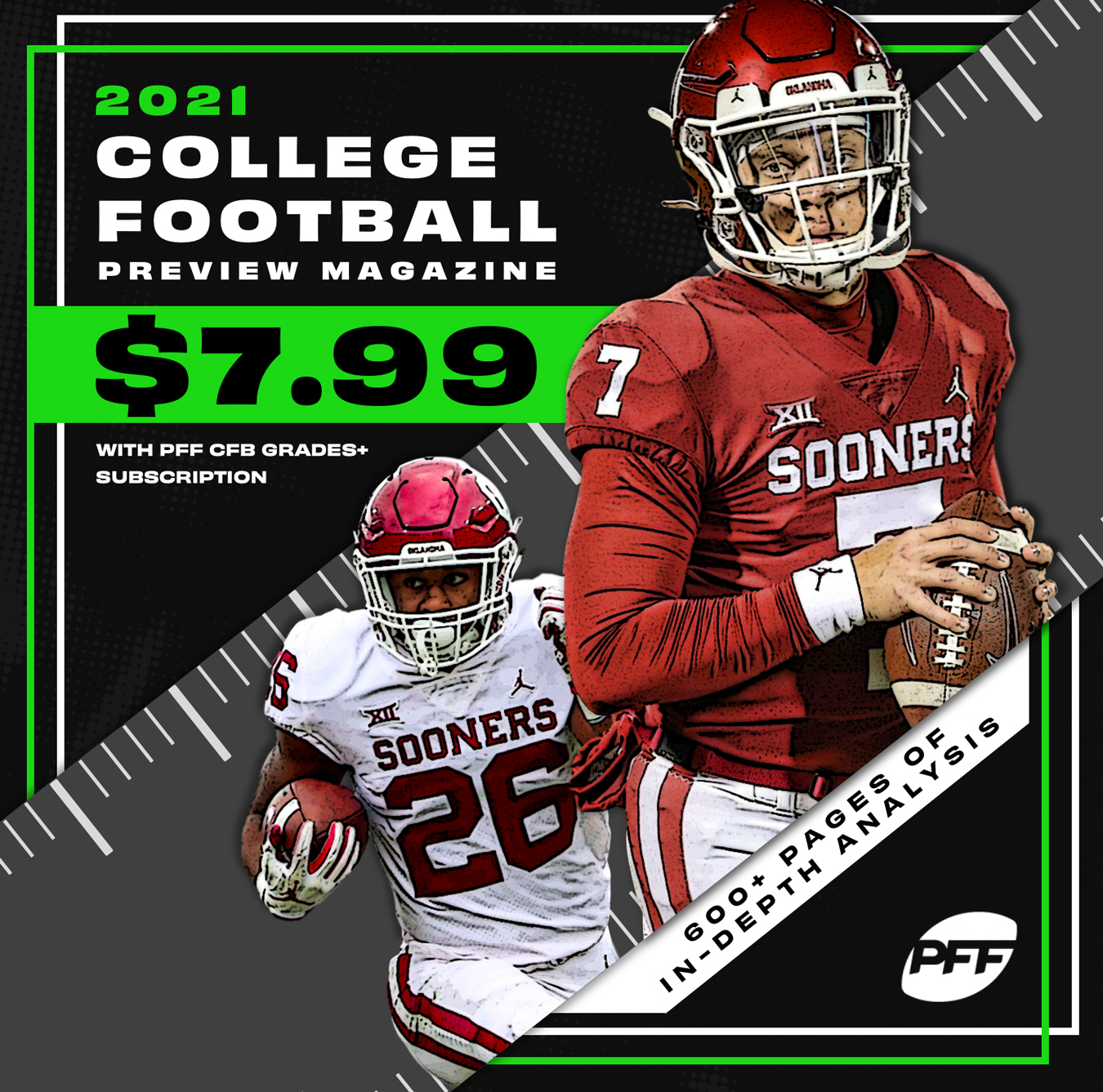 PFF’s 2021 College Football Preview Magazine offers a one-of-a-kind deep dive into every team and every conference in the FBS. You’ll get PFF grades, position breakdowns, betting predictions, accuracy data and more, making it the only resource you’ll need to prepare for the 2021 college football season.

Speaking of tight ends, this position easily sees the biggest boost because of the different rule changes. With an extra full point awarded for receptions and first down compared to the other positions, their projected fantasy output increases by over 33%. Travis Kelce projects to outscore McCaffrey and Darren Waller projects to outscore Cook. They both project to best any other wide receiver.

And because Kelce/Waller provides a positional advantage due to the poor depth at the tight end position, both should easily be gone by the middle of Round 1.

T.J. Hockenson, Mark Andrews and rookie Kyle Pitts won’t stay on the board too much longer, as they project to match top-10 wide receiver fantasy production.

Needless to say, tight ends are extremely valuable, especially the top-tier players at the position. Grab them with an early pick and wait on wide receivers.

Wide receiver is the one position that doesn’t get much love in the new format, with the order of player projections staying flat across the board. But because the other positions will be heavily sought after, patient drafters will find insane values from Rounds 3 through 7, much like in traditional drafts.

The goal through the first three rounds should be to lock a quarterback with fantasy QB1 upside, a running back with a bell-cow profile and a high-end tight end.

KICKERS ARE PEOPLE TOO

Whether it’s love or hate, everybody seems to have a strong stance on the kicker position. New to the Scott Fish Bowl this season are kickers with FLEX eligibility. So for the kicker-truthers, it’s a dream come true. They can start their besties to their heart’s desire. Meanwhile, the kicker-haters can continue to look away.

But it’s important to realize that while they may be more difficult to project, fantasy’s top kickers do score legitimate points. If No. 1 projected kicker, Jason Myers, played a different position, he’d rank as the TE18, WR58, and RB34.

There isn’t much boom potential for a kicker weekly, but there’s real production that shouldn’t be so easily overlooked.

Fantasy Soccer Outlook for the 2021 NFL season with Raiders